Setting up a libGDX project in Android Studio

***** This tutorial is based on the libGDX tutorial series at Game from Scratch. Their tutorial is helpful, but outdated, so I am going through and updating it based on Android Studio 3.0.1 and libGDX 1.9.8 *****

Before we start, please understand that I am only one person and I am going through this tutorial for my own benefit. Because of that, I won't be able to cover all instances exactly. Particularly, I use a crummy old Linux laptop for coding and don't have access to either a Windows or Mac machine to test how things work on other operating systems. Where possible I will try to provide help, but since I won't be able to test it, I can't make any guarantees.

The first step is to ensure that you have Android Studio and the Java Development Kit (if you have trouble, make sure you installed the 'JDK' specifically).

Next, download the libGDX project setup tool and put it in a convenient directory. (Note there is an official setup guide, although it, too, is a bit out of date.) Now that you have all the necessary files, let's get started on importing a project.

1. From the command line, go to the directory where you saved the libGDX setup file (gdx-setup.jar) and type:


You should see this screen now: 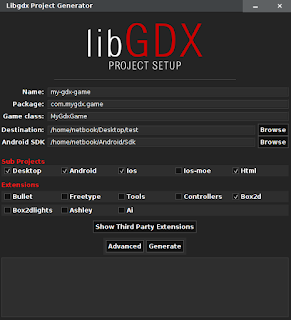 If you don't, the most likely issues are that you are not in the correct directory or that you haven't installed the Java JDK. Recheck those steps before doing anything drastic.

2. Now it is time to set up the project.
3. Now that everything is filled out properly, click that 'Generate' button. When I do this I get two warnings:

In both cases I hit 'No'. I am not sure how things will work otherwise, but I read of some fairly recent (as of early 2018) issues on Stack Overflow where the libGDX project wasn't compiling because it didn't work with the newest Android and Gradle versions so figure it is better to stick with the recommended versions.

Once that is done, go get yourself a cup of coffee and watch everything get set up.

5. When you open the project in Android Studio, it is likely you will get a popup similar to the following:

It honestly doesn't matter that much what you pick because we are going to have to change the Gradle version again anyway, but I personally select "Don't remind me again for this project" because otherwise you get an error immediately upon opening.

6. So now you should have the project open in Android Studio, and the next step is going to be getting the project to compile on desktop, HTML and Android.
Posted by Andrew Lasher at 3:57 AM